Style Living Self Celebrity Geeky News and Views
In the Paper BrandedUp Hello! Create with us
Twitter

Twitter is experimenting with a “CoTweet” feature that allows two accounts to auhor the same tweet and post it simultaneously to their accounts' profiles and followers’ timelines.

Now testing CoTweets, a new way to Tweet together. pic.twitter.com/q0gHSCXnhv

Drafting a CoTweet requires choosing the content of a tweet before sending an invite to the person you wish to co-author a tweet with. When the other party accepts the invite, the CoTweet gets posted to both users’ profiles which both their followers can see.

If you accepted the invite as a co-author but by any chance change your mind later on, fret not because you can revoke the CoTweet until it was just a regular tweet from the original author.

The original author may send as many CoTweet invites as one would like but can only invite one author to CoTweet. Simply put, CoTweet would not work with multiple accounts, only two would suffice.

CoTweet is currently only available in select accounts in Canada, Korea, and the US as this was a limited-time experiment. Once the experiment ends, every CoTweet that was posted would be deleted.

Check out samples below of how CoTweets will look when tweeted. 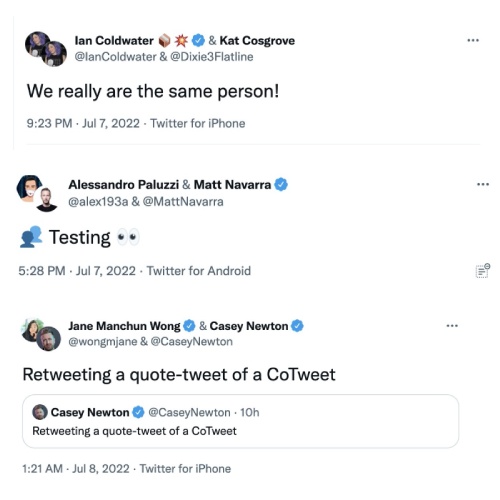