After a tumultuous past few days in the marriage of Victoria's Secret Model, Behati Prinsloo, and Maroon 5 frontman, Adam Levine, it sounds like the couple is deciding to work things out privately.

Levine first made headlines on Sept. 19 when model Sumner Stroh alleged the singer of having an affair with her, revealing their Instagram messages where he asked if he could name their third child after her.

Public scrutiny then followed the frontman, even after he released a statement saying he did not cheat on Prinsloo but indeed "crossed the line" in speaking with Stroh.

"In certain instances it became inappropriate; I have addressed that and taken proactive steps to remedy this with my family," Levine wrote via Instagram Stories on Sept. 20.

"My wife and my family is all I care about in this world. To be this naive and stupid enough to risk the only thing that truly matters to me was the greatest mistake I could ever make. I will never make it again. I take full responsibility. We will get through it. And we will get through it together."

Since then, two more women have revealed that they had been in contact with Levine. 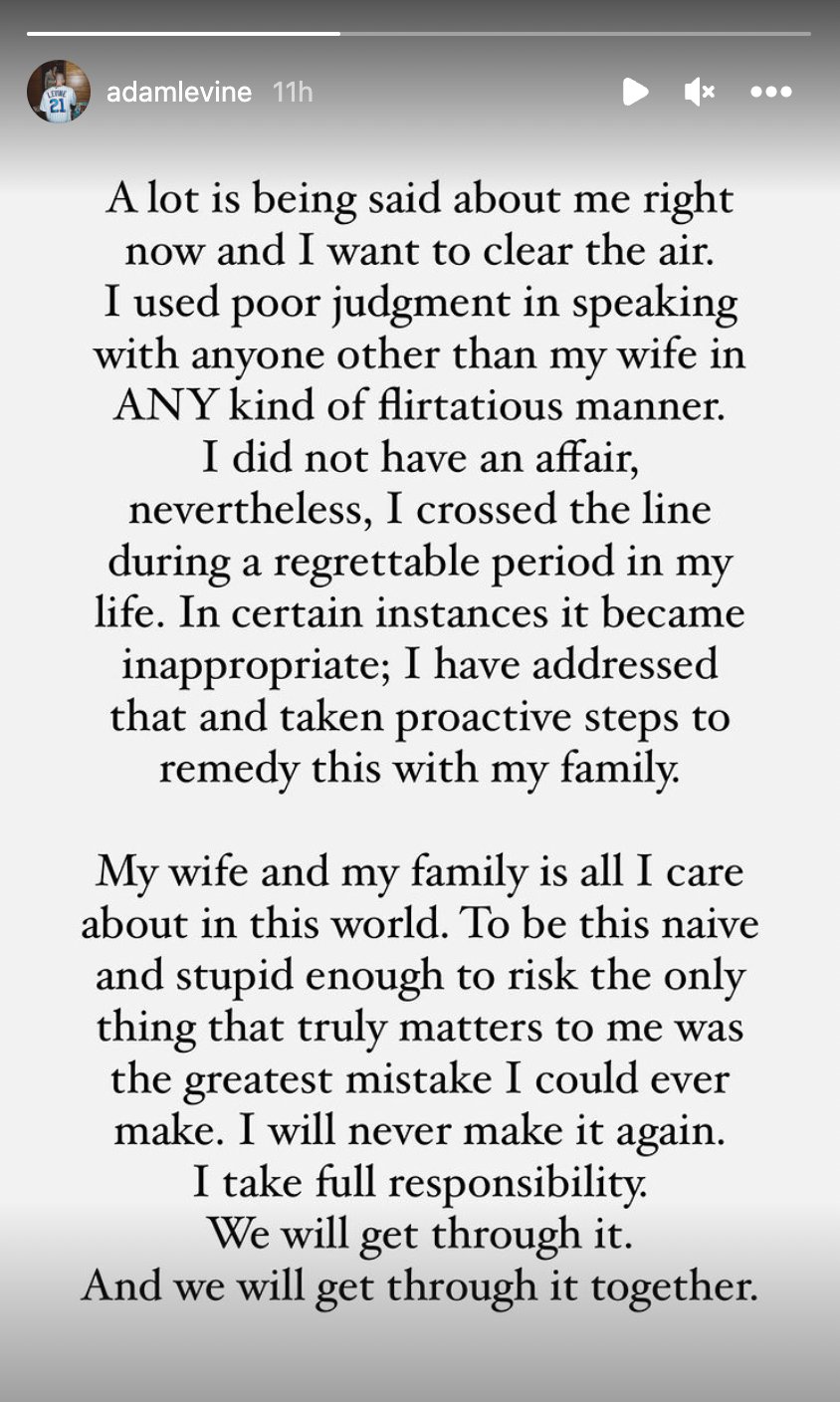 Adam Levine denies affair with IG model, but says he 'crossed the line'

Although Prinsloo has yet to make a public statement on the issue, a number of entertainment news sites have reportedly gotten in touch with friends of the couple.

In an exclusive chat with E!News, a close friend  of Levine and Prinsloo said that "Behati is upset but she does believe him that there was no physical affair."

"They have been together this entire time. She feels they are happily married and is shocked to find out what was going on behind her back."

The source added that it was a real “wake-up call” for the singer and that “he's disappointed in himself and upset that he has hurt his family like this."

Adam Levine accused of getting flirty online with two other women

Meanwhile, another source close to Prinsloo told People that she is still “committed to her family."

"She is still very upset though."

On talks of a split, the People source echoed Levine’s statement and said he is determined to patch things up with his wife of eight years.

"Adam is very understanding about her feelings… He is trying his best to make things better. He never wants a divorce."

Who is Sumner Stroh? Get to know the model who revealed Adam Levine's alleged affair

Levine and Prinsloo announced their engagement in July of 2013 and tied the knot in 2014. They share two children, Dusty Rose, 5, and Gio Grace, 4. They are currently expecting their third child together.