Style Living Self Celebrity Geeky News and Views
In the Paper Shop Hello! Create with us
Kim Kardashian/Instagram

Beyond delivering style and a striking fashion statement, Met Gala has its history of initiating rule-breaking moments infused with controversy through the years. One of this is when Kim Kardashian revealed the stakes she had to go through to fit perfectly in Marilyn Monroe's dress that she wore at the event.

In an interview with Vogue during the red carpet, Kim K revealed that when she first tried on the dress, it wouldn't fit her. But as a Kardashian herself, she took on the impossible challenge to lose 16 pounds in just three weeks.

“I had this idea to put it on and try it on. And then they came with armed guards and gloves and I tried it on. It didn’t fit me and so I looked at them and said, 'Give me three weeks.' And I had to lose 16 pounds down today,” Kim told Vogue, noting that it is a role she is determined to play even though others thought that she's not serious about making it happen.

Kim said she didn't starve herself, but strictly followed a diet that required her to cut on carbs and sweets. She also focused on eating clean, which includes veggies and lots of protein. Another important part of her three-week routine was wearing a sauna suit in addition to running on a treadmill twice a day.

Right after Kim’s diet was revealed, the socialite and TV personality drew criticisms from people who referred to her actions as a way of obstructing self-love and acceptance among her followers.

Lili Reinhart, for one, shared a series of cryptic Instagram Stories telling people to stop supporting celebrities whose entire image revolves around their bodies.

“To openly admit to starving yourself for the sake of the Met Gala. When you know very well that millions of young men and women are looking up to you and listening to your every word,” the actress wrote.

In a separate tweet, Reinhart wrote her reason why she had to speak up about this matter: “I do not say things that I say because I want to be relevant or get attention. I speak up because I don’t see enough people with large platforms calling out toxic behavior in our industry."

*sigh*
I do not say the things that I say because I want to be relevant or get attention. I speak up because I don’t see enough people with large platforms calling out toxic behavior in our industry. Some people will never understand where I’m coming from and that’s okay ☯️🙏🏻

One netizen tweeted that Kim should stop because she is "literally an antiChrist of body positivity," while another user said that letting Kim wear the dress is a disgrace as Marily Monroe is known to stand for body positivity and women empowerment. 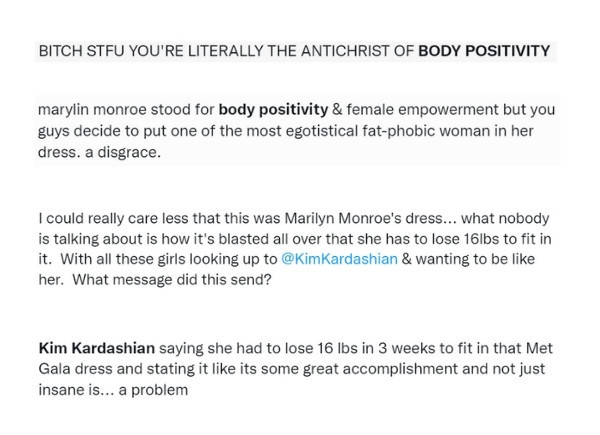 Despite that, there are also tweets that commend Kim's decision to wear Marilyn Monroe’s footprint during the Met Ball.

“Not you all hating on over a dress she actually looked good in? [intense crying emoji] If she looks bad in it, fair enough but she’s definitely one of the best dressed tonight,” one fan tweeted.

“Y’all can hate her all you want but she looks stunning I’m sorry,” one of Kim's followers commented on her post.

“16 lbs in 3 weeks to fit  into a dress. Someone please give me her number because I need to learn how to be so persistent with the goals and deadlines,” another one said.

Still and all, there's no stopping Kim from promoting her loungewear and shapewear brand SKIMS as seen in her recent retweet that shows a teaser of her upcoming "Fits Everybody Dresses," which markets all body sizes.

Jemima Cruz is a dedicated student-writer who sees writing as both her battlefield and comfort zone. With her openness to learn, she spent junior and college years writing creative essays, program scripts, and articles.

'Bridgerton' star Regé-Jean Page is the 'world's most handsome man,' according to science